Solid-state avalanche photodiodes (APDs) based on crystalline semiconductor (reverse-biased p-n or p-i-n junction devices) amplify photogenerated carriers via the impact ionization of both electrons and holes and have thus far been the only candidate for the replacement of the vacuum photomultiplier tube (PMT). However, there is significant excess noise introduced in a conventional APD. Amorphous selenium (a-Se) is the only wide band gap (~2.1 eV) non-crystalline semiconductor that produces reliable and repeatable single carrier (hole) avalanche gain at high electric fields (≥70 V/µm for 15-30 µm thick a-Se layers), without breakdown. Moreover, the high scattering rates existing in the disordered phase of selenium, leads to a non-Markovian hole branching process, which can average out the noise arising due to the stochastic avalanche process and increase determinism, resulting in experimentally measured ENF~1 at avalanche gains ~1000.[1],[2],[3]

At substantially high electric fields required for impact ionization, it is a technological challenge to avoid possible dielectric breakdown at the HBL/selenium interface where the electric field experiences local enhancement, leading to enhanced hole injection from the high voltage electrode. Thus, understanding of the transport characteristics and ways to control electrical hot spots and, thereby, the breakdown voltage, is key to improving the performance of avalanche a-Se devices. This paper demonstrates dark current simulation of a-Se based photodiodes, and calibration of defect density of states (DDOS) distribution in a-Se photoconversion layer. 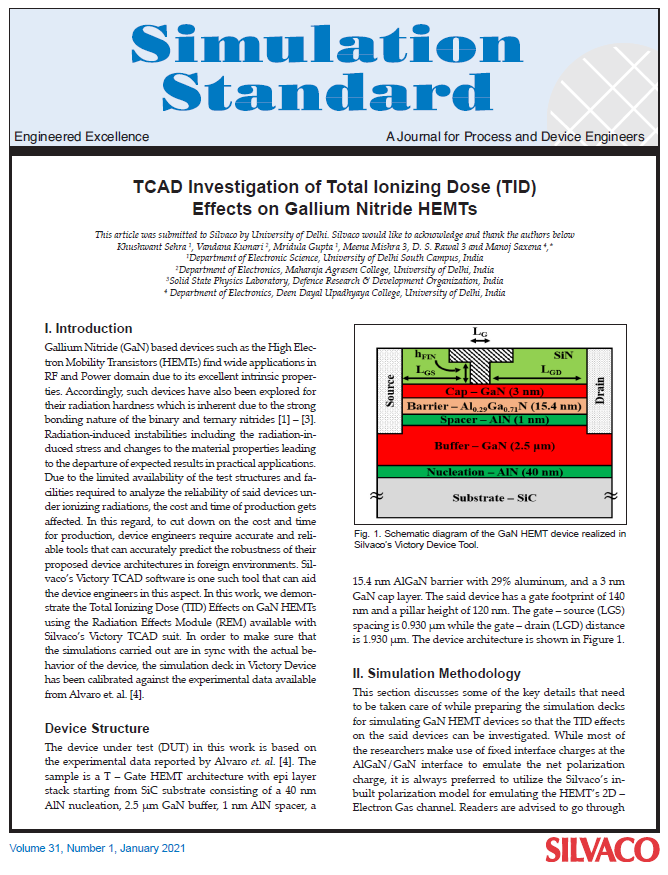 Enabling the Rapid Development of SiC Superjunction-MOSFETs in Collaboration...
Scroll to top