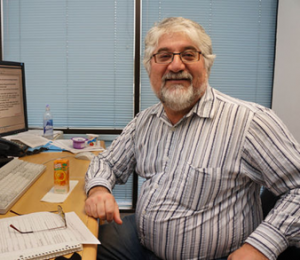 Dr. Misha Temkin was a beloved colleague and researcher who worked at Silvaco for over 30 years. He passed on March 12, 2019 after a long cancer illness. He was a dedicated Senior Applications Engineer in the TCAD Division at the Santa Clara, California headquarters.

Mikhail “Misha” Temkin was born August 22, 1955 in the small town Rechitsa on Dnepr River in Belarus, which was a part of the Soviet Union at that time. His parents, a mechanical engineer and a medical doctor just graduated a few months before and were sent by the government to work in an even smaller town in the middle of nowhere between Volga and Ural Mountains. According to his brother, the first 3 years of his life he grew there on not much food, but a lot of love. For the next 30 years he lived in Minsk, the capital of Belarus.

As a kid he played a lot of chess and won against many older players, but in Middle school he discovered the Feynman Lectures on Physics. Physics then became his passion for the rest of his life, and he studied it at Belarussian State University. His first paper “On the momentum representation of Slater-type orbitals” was published in Journal of Physics B in 1976, before his Master’s (not many postdocs in Soviet Union of that time had a single publication in an international peer-reviewed scientific journal). 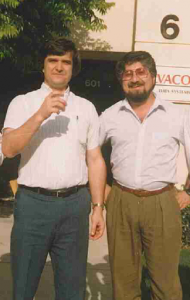 Left to right: Ivan Pesic and Misha Temkin at Silvaco, circa 1990

It was almost impossible for a Jewish student to get into a Soviet graduate school, but Misha did. He started his career as an atomic physicist and completed his PhD on ion implantation, modeling and atomic interaction in 1981. His research work was printed in Russia, and then in 1986 it was translated into English by a New York publisher, which got him noticed. According to Google Scholar, he has published two books and 45 technical articles and papers which have been cited over 400 times by other researchers.

Misha moved to the US in 1988 as a Jewish refugee and set about trying to find a job. Then in one of those alignment of the planets, he saw an ad in the San Jose Mercury wanting an engineer knowledgeable in semiconductor process simulation and SUPREM. It didn’t say who the company was. He sent his resume but heard nothing for 6 weeks until one Sunday morning, at 6am, he gets a call. It was Ivan Pesic, the founder of Silvaco. “I want you to work for me,” he said. He started work that Monday without even having negotiated a salary. He only found out what he was being paid when he got his first paycheck. He was the first TCAD person at Silvaco. The whole company was Ivan and about 8 or 9 engineers. After joining Silvaco in 1989 he led the development and support of the Athena process simulator and later the next-generation Victory simulator.

After 30+ years Misha was a Silvacan until his last day. The kind of loyalty he had is not often seen these days. On his personal time, Misha was an avid chess player, and liked watching all kinds of sports and supported the Bay Area baseball, hockey, and basketball teams. His colleagues mentioned his patience and how he never lost his temper. He always had a positive attitude and outlook despite his illness, which ran for five years. 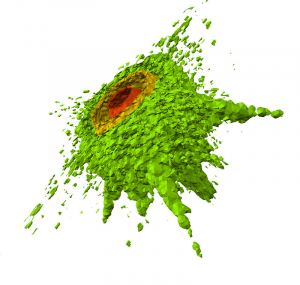 At the 2016 Design Automation Conference his submission to the first Silicon and Technology art show won the Best Visualization award, which is shown here. It illustrates the beauty he found in his work.

David Dutton, Silvaco CEO, said this: “Misha was one of our longest tenured employees and helped build the Silvaco TCAD legacy. He was truly a pioneer in process simulation. His always positive attitude and helpful way will be missed. Misha loved to talk about his family, how well his kids were doing and the special visits of his grandkids. Our thoughts and prayers go out to Misha’s family.”

Misha is survived by his brother Vadim, wife Luba, son Eric, and daughter Masha. His funeral was held on March 15 at Sinai Hill Chapel in San Francisco. His family would like any donations, on behalf of Misha, to go to the Melanoma Research Foundation CURE OM program. If you would like to donate, please visit http://tinyurl.com/donate-to-cure-om.